Scorer of the winning goal against Switzerland, Casemiro exalts his opponents and celebrates the standings: “Boring group” 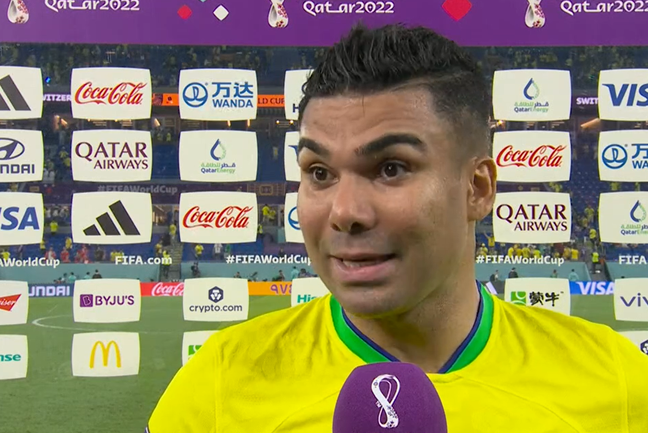 Volante was the author of a great goal against Switzerland, which ensured the early classification of the Brazilian team for the next stage of the World Cup

Brazil qualified early for the round of 16 of the World Cup after beating Switzerland 1-0 this Monday 28 at the 974 Stadium in Doha, Qatar. Author of the only goal of the game, the defensive midfielder Casemiro celebrated the goal, he celebrated the standings, without ceasing to exalt his opponents🇧🇷

After the final whistle, Casemiro spoke to the press about the difficulties in Cup Group G, made up of Brazil, Serbia, Switzerland and Cameroon. “Before starting the competition we knew that the group is difficult, our group is very difficult. Serbia, our first match, is a boring game, a team that knows how to play, knows how to propose the game.”

“Today, once again, we know it was going to be a very difficult match. So, the first objective is to qualify, so that’s very important, especially in such a difficult group,” said the defensive midfielder, who also praised his teammates’ performance.

“We held on well, we were patient. It’s a boring game, (the Swiss) have experience, they know how to play, a detailed game. We knew we’d have the ball to score and thank God we did it to “.

With the victory, Brazil secured an early qualification for the round of 16 of the World Cup still in the second round of the group stage. Next Friday, the 2nd, Canarinha will face Cameroon at the Lusail Stadium. Serbia and Switzerland will also face off to define second place in the group.

Chinese stocks rose...
Previous articleWho can face Brazil in the round of 16 of the World Cup?
Next articleDiesel climbs again in November at gas stations in Brazil, says Ticket Log