Accompanied by Lorenzo, Cano, from Fluminense, has fun in Qatar and is ‘hot foot’ in Brazil’s debut at the World Cup 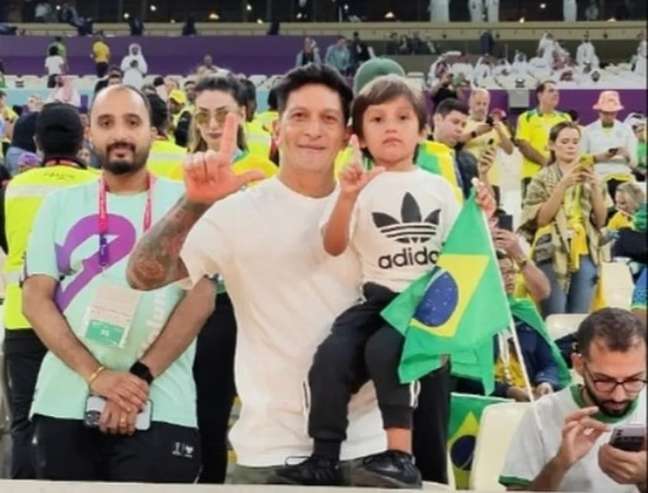 The 34-year-old Argentinian enjoyed a magical season with Fluminense, scoring 44 goals and, after renewing his contract, is enjoying the World Cup with his son in Qatar

After closing the season as Brazil’s top scorer, Fluminense’s Germán Cano is still in Qatar to accompany the world Cup next to his son Lorenzo. Although he was not in the squad, the player saw Argentina’s surprising setback against Saudi Arabia up close. On the other hand, this Thursday, he had a hot foot and saw Brazil’s triumph over Serbia.

This time the attacker did not post on his social network that he was present at the match, but was filmed on the official FIFA profile holding his son Lorenzo on his lap with a Brazilian flag.

At the age of 34, Cano was not called up by coach Lionel Scaloni to compete in the World Cup even having the best season of his career. The Argentine has played 70 games, scored 44 goals and provided seven assists for Fluminense in 2022.

German Cano’s numbers and records in 2022

The striker played all 38 rounds for the Brasileirão, just like his compatriot in 2010. On the pitch, he scored 26 goals and became top scorer, seven goals clear of second-placed Goiás’ Pedro Raul.

Furthermore, Brasileirão had not had a foreign top scorer for 50 years. The last was the Uruguayan Pedro Rocha, scorer of 17 goals in 1972, with the San Paolo shirt, and shared the prize with Dadá Maravilha, of Atlético-MG.

In the best season of his career, Cano scored 44 times in the season and surpassed his best year, when he had scored 41, in 2019, for Independiente Medellín, from Colombia. He was top scorer in the Brasileirão and also in the Copa do Brasil this season.

In doing so the player overtook Neymar and Gabigol, who scored 43, respectively in the years 2012 and 2019, as the athlete with the most goals in a season in Brazil since 2006. The number 14 had also surpassed Magno Alves as the number one goalscorer in the club carioca in the same year in this century.

Previous articleOn December 13, Zelensky will take part in the Ukrainian Resilience Conference in Paris
Next articleOpinion: Hide the gold? Qatar surprises in the good reception of women at the World Cup