Head down, Neymar leaves the stadium in slippers and ice on his right ankle 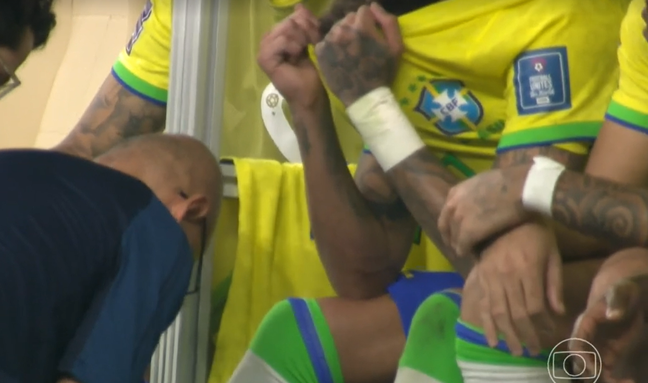 The star of the Brazilian national team Neymar Jr. he left the stadium in flip flops and with ice on his right ankle. The aggressor crossed the mixed zone, with the press, in silence and with his head bowed. He had difficulty walking and limped a lot.

The PSG star left the field in the 34th minute of the final tournament and Antony came on in his place. A few minutes later, he was seen leaving the lawn crying and putting ice on the spot still on the bench. At the end of the match, the broadcast showed Neymar barefoot, limping, as he made his way to the locker room.

In a post-match interview, Brazilian team doctor Rodrigo Lasmar said it was still too early to talk about continuity in the starting lineup. According to the specialist there was a sprained right ankle, with edema and swelling. “We have already started treatment. We have to wait, between 24 and 48 hours. We will evaluate tomorrow and decide,” said Rodrigo Lasmar in a press conference still inside the stadium. “Expectation is observation. Any claims about continuity are premature.”

Tite said Neymar was already feeling pain on the pitch during Brazil’s goals. He reportedly played at least 11 minutes with ankle pain before being substituted. The coach, however, says the star will continue to play. “Neymar will play in the World Cup, you can be sure of that,” he guaranteed.

Previous articleNeymar suffers a sprained ankle, and the Brazilian national team doctor talks about the evolution in 48 hours
Next articleThe best way for the electricity sector and all energy consumers; read the article