Ball touched by the hand of God during the 1986 World Cup sold for 2.4 million dollars 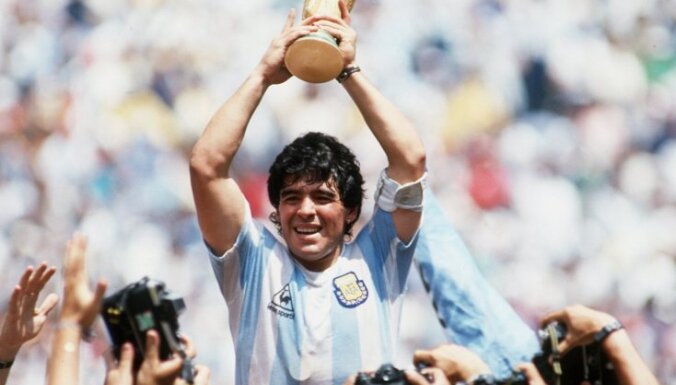 The soccer ball used by Argentine footballer Diego Maradona to score two goals in the 1986 World Cup quarter-final against England has been auctioned off for £2 million ($2.4 million).

The first goal scored in the game between England and Argentina has become one of the most famous in history. In the 52nd minute, with the score 0-0, being in the opposing penalty area, Maradona jumped up at the same time as England goalkeeper Peter Shilton and sent the ball into the goal with his fist. He later said the goal was scored “partly by Maradona’s head and partly by the hand of God”.

Four minutes later, Maradona scored the goal known today as the ‘goal of the century’. He received the ball in his own half and started heading towards the opposing goal, passing one player after another. Passing five England players, he circled the keeper and scored a goal. As a result, the British lost with a score of 1:2.

British auction house Graham Budd sold the ball, which was on the pitch for the entire match, so that its new owner could, to some extent, join Maradona’s famous two goals at once. The buyer’s name is not called.

After the game, the ball fell into the possession of Tunisian referee Ali Bin Nasser, who refereed the game – and made the final decision that the ball, “corrected” by the fist, flew into the goal according to the rules .

Nasser explained his decision as follows: “I didn’t see well what happened. There were two players in front of me – [вратарь сборной Англии Питер] Shilton and Maradona. According to FIFA recommendations made before the championship, I looked at the linesman to confirm if the goal was scored according to the rules. The referee ran to the halfway line, showing that the goal was well scored.

Now Bin Nasser has sold the famous ball. Before the auction, the arbiter expressed his hope that the new owner would expose it to the public.

In May this year, the T-shirt Maradona wore during the quarter-finals against England was auctioned off for $9.3 million. Thus, a new record was set for the sale of sports memorabilia at auction.

Agent of the year: Rafaela Pimenta wins third prize in Europe in 2022

The CEO of ANSA meets the Chilean authorities