Turkey has launched production of its first electric car. It can also be purchased in Europe 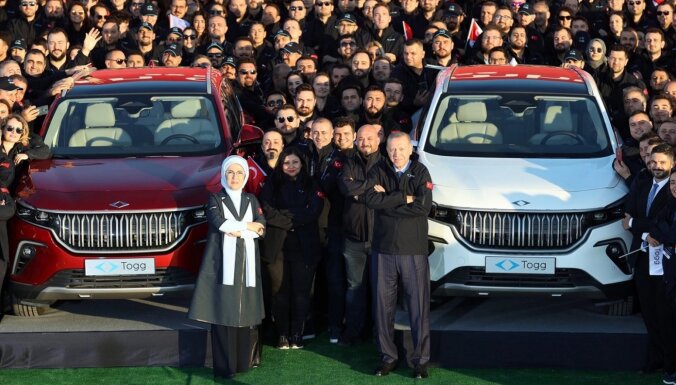 Turkey has launched the mass production of the Togg electric car, which is a compact car with an output of up to 400 horsepower. Turkish President Recep Tayyip Erdogan, on whose initiative this project was launched, was also present at the solemn ceremony on the occasion of the launch of production. In the coming years, Togg electric vehicles will also be exported to the European Union (EU) market.

A prototype of the all-electric passenger car brand Togg was introduced in 2019. Two years later, the first body was created, and in the summer of 2022 the first test batch of these cars was mounted.

It is not yet known how many of these Togg electric vehicles will be produced before the end of the year. However, it is planned to produce 100,000 units per year, although the maximum capacity of the factory is 175,000 units per year.

The Togg SUV has a relatively long wheelbase – 2.8 meters – and modifications of two types, which differ in the power of the electric motor and battery. In the basic version, the SUV has one 200-horsepower electric motor on the rear axle, which allows you to accelerate to 100 kilometers per hour in seven and a half seconds. With a fully charged battery, the electric car will be able to travel 300 kilometers.

In turn, the most powerful version will be equipped with two electric motors with a total power of 400 horsepower, which will provide a more sporty ride – acceleration to 100 kilometers per hour in 4.8 seconds. In addition, with a full charge, this SUV will be able to travel up to 500 kilometers, and the battery can be charged up to 80% in half an hour.

Eventually, the equipment list of the Togg electric SUV should include a third-level autonomous driving system.

The first Togg electric vehicles will come to customers in 2023. Over the next year in Turkey, an SUV will cost from 43 to 54 thousand euros. After that, the Togg electric car will be exported to EU countries including Western Europe.