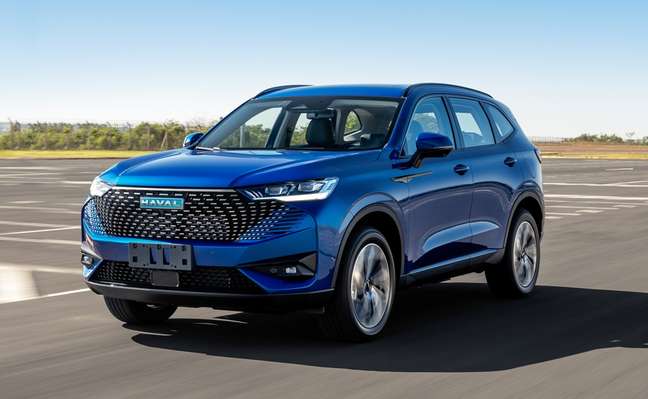 Still unknown in Brazil, the Chinese Great Wall Motors will debut in 2023 with the Haval H6, a hybrid SUV up to 393 HP

GWM (Great Wall Motors) has ambitious plans for Brazil. After announcing that it will have 50 dealerships in the country as early as 2023, the Chinese automaker launched its brand in the Brazilian market this Wednesday 23. Furthermore, GWM Brasil also revealed its first model to be sold locally, the Haval H6. We at Guia do Carro had the opportunity to take a pre-test drive of the SUV, which you will soon see here.

With launch scheduled for the first half of next year, the Haval H6 will be the first of 10 launches GWM intends to launch in Brazil by 2025. Here, the brand will have the Poer (pickup), Haval (urban SUVs) and Tank (luxury off-road SUV). Initially, the new Haval H6 will be imported from China. GWM’s first domestic product will be a flex-fuel hybrid pickup from the Poer line. It will be produced in Iracemápolis (SP) and the debut is scheduled for 2024. For now, the automaker is not yet officially commenting on other models besides the duo.

Still without revealing many technical details of the Haval H6, GWM Brasil has stated that the SUV will have plug-in hybrid versions of up to 393 HP and a 100% electric range of up to 170 km. In the future, the Chinese brand is still working on the arrival of less powerful versions, but with greater autonomy. In the case of the top-of-the-range option, the hybrid set consists of a 1.5 turbo engine and two electric motors, one per axle. All-wheel drive is all-wheel drive.

During a presentation made to the press, GWM also highlighted that the SUV will have lower costs per km and lower pollutant emission rates than its main competitors. Also according to the brand, average consumption will be 28.7 km/l in the city and 25.3 km/l on the road. As for price, the automaker is still a mystery, but it adds that the Haval H6 will aim directly at the top-of-the-line versions of the Jeep Compass, Toyota Corolla Cross and Volkswagen Taos.

Therefore, we can expect values ​​above R $ 200 thousand. Despite being imported from China, the new Haval H6 will have some changes to arrive in Brazil. Among these are new bagels of logos and 19” alloy wheels, as well as specific changes to the steering, suspension and translation of the car’s electronic systems, which will support voice commands in Portuguese.

In addition to the announcement of the new Haval H6, GWM Brasil also talked about its future dealerships, which the brand calls House of Tomorrow. With the intention of opening up to 133 points of sale by 2024, of which 50 in the first half of 2023 alone, the company intends to integrate the sales and after-sales sectors by focusing on a technological and interactive concept for its stores , which have electrified vehicles of the Poer, Tank and Haval lines.

Among the novelties of the new GWM concept is the possibility of buying – or opting for a subscription – a car in physical stores, or through the brand’s official website and application. The customer will also have the convenience of receiving or picking up the car at home or at any desired address in Brazil.

Previous articleLeclerc has had a bumpy season, but ends 2022 strong, analyzes Gabriel Curty
Next articleSee how many prizes players in the Savings Selection earn